Coconut water may have just shown up on your grocery store shelves a few years ago, but it’s been a popular drink in Vietnam for centuries. You won’t see the packaged stuff, though: here, it’s drunk straight out of the coconut—and this coconut water is grassier, sweeter, and more full-flavored than anything you’ll find in a package—trying it is like drinking raw milk for the first time. Generally, the smaller coconuts are sweeter than the larger ones.

Whole coconuts are unwieldy to store, so vendors will chop off the outer green husk and keep the small white inner shell, cut into a shape that won’t fall over when put on a flat surface. These white globes are usually kept on ice until you order one, then a giant machete is used to chop a hole in the top.

Coconuts are usually harvested when they’re about seven weeks old—any earlier and the juice is gassy, any later and it tastes too salty. To judge the readiness of a coconut, the harvester will chop one open to inspect the flesh, which should be jelly-ish but not completely translucent. Hard white coconut flesh is a sign that the fruit is too old for drinking.

Locals will advise you not to drink coconut water after 5 p.m. if you want to sleep well, because they believe it has diuretic properties if you drink too much of it; before 5 p.m., however, it’s the go-to drink for rehydrating. 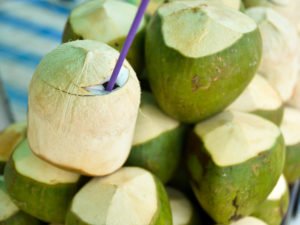